La mélodie du bonheur : The Sound of My Music

La mélodie du bonheur : The Sound of My Music

When I was a very young child, I told my mother that I wanted to be an inventor. Not just any inventor, an inventor of musical notes. Just a few years later, I discovered The Sound of Music and Ice Castles, two films that were to change my life forever. The first ignited my passion for musicals and the second inspired me to compose music for figure skating. 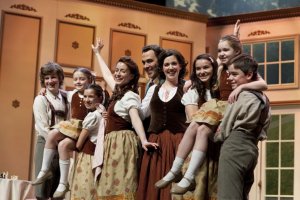 I am sure you can imagine my excitement when I was asked to work on the Quebec version of The Sound of Music under the direction of none other than the dynamic Denise Filiatrault. I had previously worked for this grande dame of the theatre on projects that included Nine, My Fair Lady and Fiddler on the Roof. For this new adventure, my role was to create arrangements for virtual orchestra and then interpret them live, for every performance, of which there were more than 160!

I am family oriented by nature. Every time I find myself with my Sound of Music family, my heart rejoices. I could play, hear or watch this masterpiece hundreds of times without getting tired of it. Of course, with its unforgettable melodies and its touching true story—at least for the most part—this musical is a model for any creator of musicals who is seeking that perfect balance between drama and comedy, love and hate, spirituality and materialism, inner solitude and family life.

I only hope that I will once again have the pleasure of sharing moments of pure joy with my favorite Von Trapps. Perhaps during the 2015 holiday season…