Karl Hugo has been working for 25 years in partnership with Hugo Chouinard of Studio Unisons, a musical designer specializing in figure skating, synchronized swimming and dance.

Karl Hugo began playing and composing on the piano as a child, creating his first concerto when he was barely a teenager. During this period, he had an epiphany while watching the movie Ice Castles: he would spend the rest of his life composing music for figure skating! In 1992, his dream came true with the release of his first piano album. He then met Ice Capades star Julie Brault with whom he filmed Broadway, an ambitious video combining piano and figure skating.

After coming to the attention of IMG in New York, Karl Hugo was invited to play his compositions at professional ice skating shows such as Champions on Ice and Skate the Dream, always accompanied by his transparent Kawai piano. He also wrote music for ice dancers such as Isabelle & Paul Duchesnay, Isabelle Delobel & Olivier Schoenfelder and Marie-France Dubreuil & Patrice Lauzon. 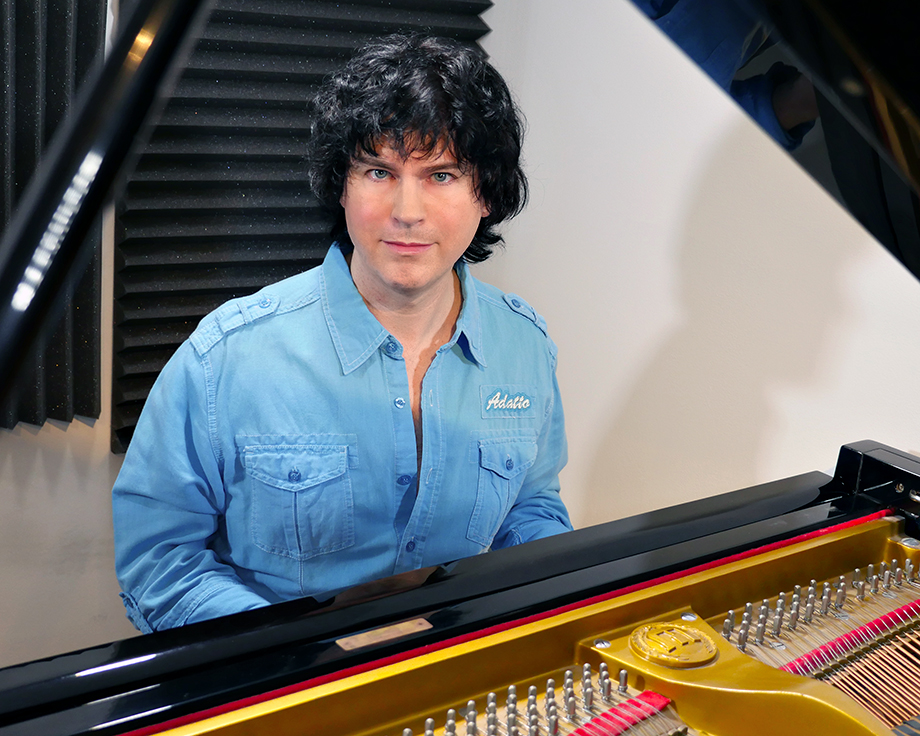 Caught up in the excitement of the Games, Karl Hugo has also just released his new instrumental album Red Sparkles on which he performs 12 original pieces on the piano. As you may recall, in 2015, he decided to return to his solo career with the release of the album Blue Sparkles while maximizing his social media presence, where he recently reached 17,000 fans on Facebook. In addition to his extensive web presence, Karl’s vast musical repertoire is aired in over one hundred countries around the world on prestigious TV networks such as ABC, BBC One, CBC, Disney Channel, Disney Channel Asia, Fox Japan, Indosiar, MediaCorp Channels 5 & 8, Telemundo, TVA, TF1 and Zee Café India.

This is a medley of Karl Hugo’s original music specially composed for skaters and synchronized swimming teams.

For Hubbell and Donohue’s free dance, I composed a grand finale recalling the beginning of thier program and blending perfectly with Kissing You performed by Des’ree to ultimately create a kind of original mashup.
Madison Hubbell & Zachary Donohue 2018-2019 FD

Karl’s very personal adaptation and performance of the famous You Are So Beautiful (Fisher/Preston) made popular by Joe Cocker.
Cynthia Phaneuf 2008 SP


If you require Karl’s services for any kind of figure skating music work or creation, please contact:

Inspired by the musical themes of the program while maintaining the same texture, Karl Hugo created this Olympic final.

In order to legalize and flesh out the last part, Karl Hugo added an orchestral beat that was initially subtle and more and more powerful and complex to a triumphant finale.

In order to intensify the last part, Karl Hugo has added a string orchestra that envelops the singers.

Karl Hugo created a layer of orchestra and choir as well as an epic finale.

Karl Hugo created a grand finale to this Anne Hathaway’s version of I Dreamed a Dream from Les Misérables.

Because the original version of Cheek to Cheek was too smooth, Karl Hugo used an old time orchestra to beef up the finale.

Karl Hugo “legalized” the beginning of The Prayer by adding orchestral pulses overdubs and instrumental flourishes.

It is quite possible to “legalize” a program by adding beats to classical music with taste and subtlety.